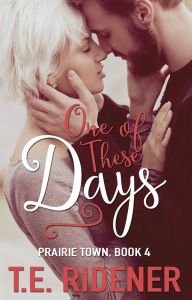 Agatha Reed has had too many of those days. Struggling to rebuild her life in the wake of the tornados that destroyed Prairie Town, Aggie comes face to face with the one thing she’s not prepared for. Someone who really loves her.

Aggie has seen her transgendered best friend Lydia find happiness, she has seen Laney, Lydia’s sister, struggle with depression and finally find the help she needs. But for Aggie, nope, that can’t happen.

With a past that torments her and Agnes, her male counterpart, demanding attention and control, Aggie believes that no man, no woman, would ever want her; (s)he’s not normal.

But for Aggie it does happen with a wonderful man named Jebson.

In the mix of straights and oddities that make up Prairie Town, Jeb is the lynch pin. Neither threatened nor angered by Aggie’s past or the group of non binary friends that surround her, he is willing to learn, and to help Aggie learn, that there is always someone who loves you. That’s what I loved about him the most. He is a straight guy accepting the strangeness around him without defensiveness or anger. He is the pivot that holds the whole series into normal.

The Prairie Town books, by T. E. Ridener, are an excellent addition to the LGBT+ romance genres.  I’ve read a few novels now in these sub-genres and find many of them disappointing. There is more to making a novel diverse than using the stereotypical romance novel caricatures and magically switching body parts so that you can show gay/lesbian sex scenes.

I can’t recommend this series highly enough, not because of the genre or the gender. Because the people are real, the stories have depth and nuance, and the writing is clear and heartwarming.